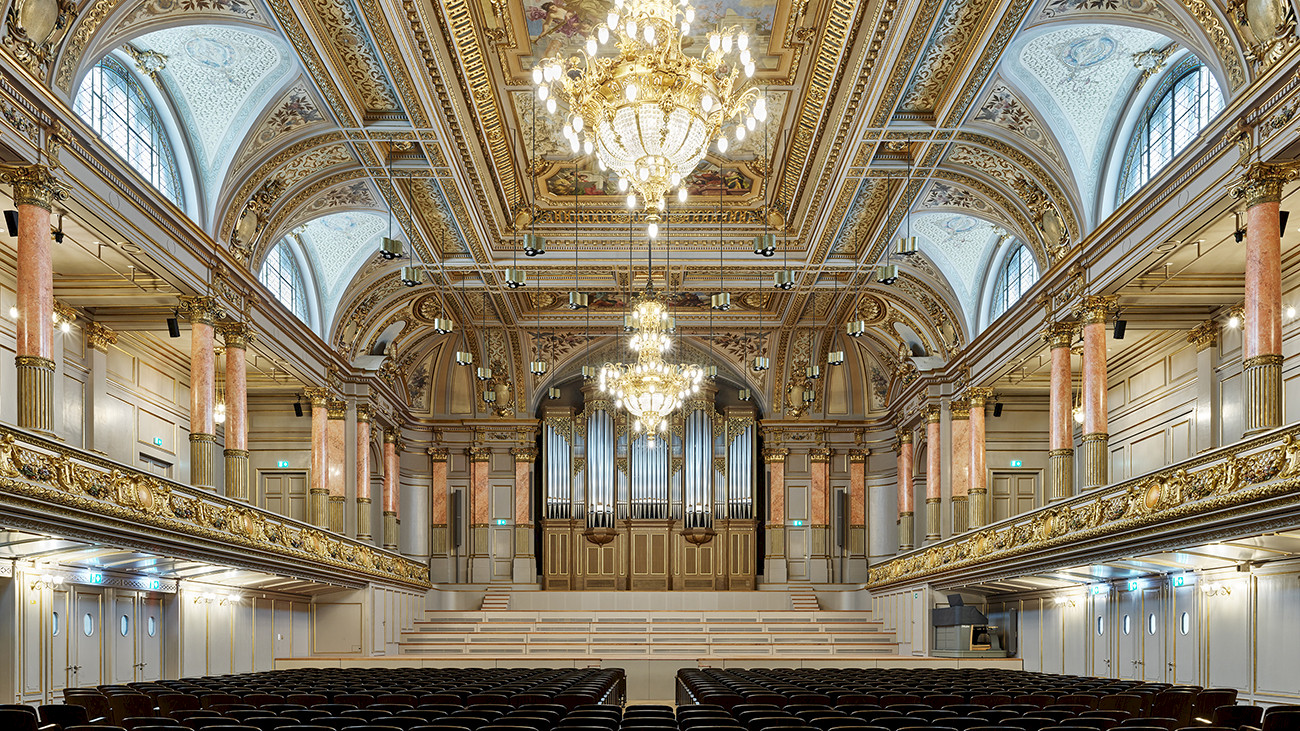 The Tonhalle Zürich, having undergone a complete programme of renovation between 2017 and 2021, has now been restored to its former glory.

Built at the turn of the 20th century, the Tonhalle has seen many changes in the course of its history. Partially demolished, the building was extended with the addition of the Kongresshaus; much of its original ornamentation was removed; its colourful decoration was toned down and then restored. However, the two concert halls remained substantially unchanged – which is particularly fortunate, as the Grosse Tonhalle is acoustically one of the world’s finest concert venues.

The entire complex is now classified as a historical monument. Thanks to the Zurich electorate, which in 2016 voted by a large majority in favour of a complete renovation, the venue now meets today’s varying requirements both in the auditorium and behind the scenes – and has been restored to its former glory. Following the renovation programme lasting from 2017 to 2021, the Grosse Tonhalle’s old tonal brilliance has also returned.

The History of the Tonhalle Zürich

The first Tonhalle originally stood on what is now Sechseläutenplatz in Zurich’s city centre. The former Kornhaus building was converted into the Tonhalle in 1867 and demolished in 1896, as the new Tonhalle had been ceremoniously inaugurated on the shores of Lake Zurich in October 1895. The inaugural concerts were conducted by Friedrich Hegar, Chief Conductor at the time, and the composer Johannes Brahms. The Tonhalle on Lake Zurich was designed by the Viennese architects Fellner and Helmer, who had built Zurich’s City Theatre – now the Opera House – only a few years earlier (1891).

In the large concert hall, five striking ceiling paintings depict various musical scenes. The centrepiece is the «Composers’ Heaven» by Viennese decorative painter Peregrin von Gastgeb, which features portraits of Bach, Handel, Gluck, Haydn, Mozart, Beethoven, Wagner and Brahms. To this day, the Tonhalle’s large concert hall has remained one of the best in the world in terms of acoustics and can accommodate a concert audience of more than 1,500.

Due to the Swiss National Exhibition being held in Zurich in 1939, the prestigious Wilhelminian festival building, together with its pavilion and Trocadéro towers, was demolished and a plain conference building designed by architects Max Ernst Haefeli, Werner Max Moser and Rudolf Steiger erected on the same site between 1937 and 1939.

Fortunately, the Tonhalle’s two concert halls were preserved by integrating them into the conference building. The plaster ornamentation and busts of composers in the concert halls, which were considered too lavish, were partially removed. The colourful decorative scheme was replaced by shades of grey and brown, and the pink scagliola columns were whitewashed.

Further conversion, renovation and restoration work followed over the decades. In 2008, a controversial new building designed by Spanish architect Rafael Moneo was firmly rejected in a referendum. In 2016, however, the City Council’s plans for the repair and renovation of the Kongresshaus and the Tonhalle met with great approval from the Zurich electorate.

After some building delays, the Tonhalle Zürich is thus about to regain its festive aura and will be formally reopened with a concert given by the Tonhalle-Orchester Zürich in September 2021 – its 126th year.